On the occasion of the sixth birthday, Oneplus presented its first concept smartphone: The Oneplus Concept One will never come on the market, the technology used in it will – at some point.

A few days after the first teaser of the Concept One, Oneplus launched its first concept- Smartphone revealed in the course of the CES 2020. Contrary to initial speculation, this is not a foldable, but a classic smartphone with high-end technology from the Oneplus 7T (test) and leather back in Mclaren orange, where the main camera can be hidden. 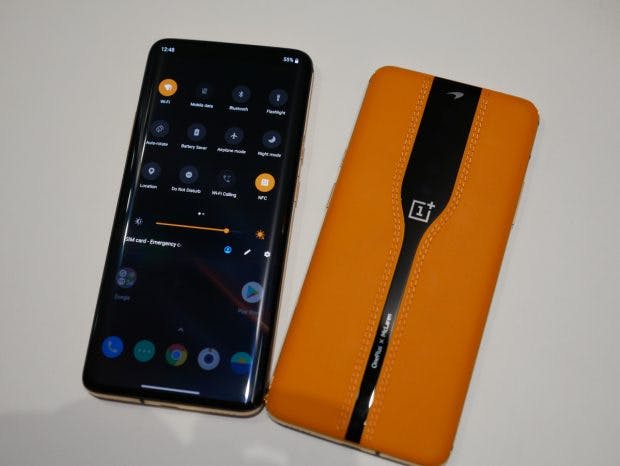 Oneplus Concept One: Equipped like a Oneplus 7T with leather and electrochromic glass cover. (Photo: t3n)

As already indicated in the teaser, the main camera on the back is embedded in the housing on the one hand, on the other hand hidden behind an electrochromic glass that switches between transparent and opaque when electrical voltage is applied. The glass changes from opaque to transparent within 0.7 seconds so that the camera can be used at lightning speed when activated. According to Oneplus, the electrochromic glass is 0, 35 millimeters roughly as thin as a conventional screen protector.

The technology is not new and is used, for example, in the window panes of buildings or the windows of Boeing 787 used for a long time. But this technology is also used for the McLaren 720 , Oneplus has taken over the technology from the car manufacturer with which the Chinese company has been working for some time.

Electrochromic glass has two glass layers and two further conductive layers in between – in the middle of this arrangement is the actual electrochromic layer. Applying a DC voltage changes the opacity.

According to Oneplus, the use has an aesthetic background. Because the trend towards three and more camera sensors on the back would also make smartphones more unsightly. With the help of the electrochromic glass, the cameras could be concealed, so that the manufacturer can regain more control over the design, according to Oneplus.

In addition, it is theoretically possible to influence the color of the glass with different voltages, according to the manufacturer. In this way it would be conceivable to give smartphones their own touch. However, this function is not part of the Concept One.

According to the manufacturer, the glass layer does not only offer an aesthetic aspect. With the help of the electrochromic glass, a neutral density filter (ND filter) can be activated in the Pro mode of the camera app, which should help to take photos even in bright light or long-term photos in daylight. In cameras, ND filters are attached to a lens – with the Oneplus Concept One, the glass layer would only be set to semi-transparent, according to Oneplus. Since the presentation of the smartphone was held in a conference room, the effect could not be tried in daylight.

Oneplus is continuing to work on this technology to one day integrate it into smartphones. However, the manufacturer could not give a specific period when it could be so far. It will probably be nothing this year.

Windows Tablet Test 2020: The best 2-in-1 devices with Microsoft OS

Oneplus Concept One: Electrochromic glass also serves as an ND filter for the camera