Bosch presented its Smartglasses-Light-Drive at CES in Las Vegas. It doesn't want to dazzle anything more than smartphone notifications and can even be integrated into conventional glasses.

With the Smartglasses-Light-Drive, Bosch is doing a very good job under the technical name BML 500 reduced form of smart glasses. The system weighs only ten grams and has a maximum of 75 x 8 x 10 millimeters just small enough to be integrated into or attached to conventional temple pieces , A 350 – mAh battery should be used for a 14 – hourly use is sufficient. The system does not require any display because the image is projected directly onto the wearer's retina.

This image display works line by line, similar to a tube monitor. For this purpose, a holographic element is used inside the module, which, in cooperation with a light scanner, generates a beam that is directed onto the retina surface of the glasses wearer via a lens.

This creates a high-resolution 2D image in the equivalent size of a business card that only the wearer of the glasses can see, but not his surroundings. Rather, the Light Drive is largely invisible to outsiders.

Incidentally, the laser only works with 15 microwatts. For comparison: laser pointers work with up to 1. 000 Microwatts and are still considered safe for the eyes. Nobody has to worry about his eyesight. 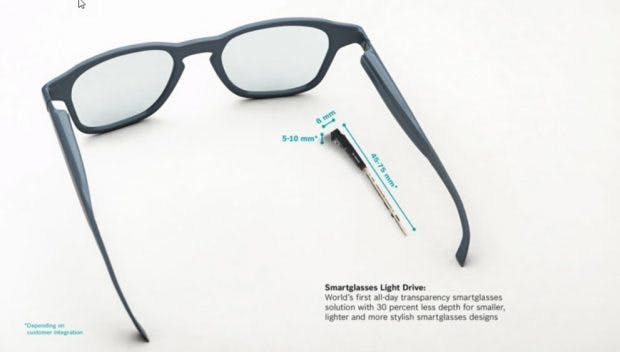 The system is very small and therefore easy to integrate. (Photo: Bosch)

All that is visible is the technical structure, which Bosch promises to minimize, as well as a tiny colored dot on the surface of the glasses that can be recognized by outsiders if you look closely.

If the glasses wearer switches off the system, there is nothing left to indicate the smart glasses. In particular, as with other proposals, the view does not remain impaired because Bosch does not need the lenses themselves for the system.

Intelligence comes from the smartphone

Beyond the optics, the Bosch system does not have its own intelligence, but is controlled via a paired smartphone. In this respect it is to be understood as a display extension.

For smaller control requirements, such as confirmation or scrolling, Bosch integrates multi-tap functions into the module. So the user can make a limited selection of actions by tapping on the temple.

Bosch smart glasses are fundamentally different from other approaches. They do not rely on maximum features, but simply want to perform a simple task with simple means. This should be reflected in relatively affordable prices that would certainly affect market success.

End consumers will not, however, directly benefit from the smart glasses, because Bosch will only sell the modules to large series suppliers who can make their own products out of them. In this respect, it is consistent that Bosch does not name any prices for its light drive module.

Refrigerators tested: the winners of the Stiftung Warentest

CES concept: Duet and Ori are the folding and folding notebooks from Dell

CPUs in the benchmark: the best processors